A few weeks ago, Mary got in touch to ask if I would be able to play a few selections of music for her husbands 70th birthday party.  Mary didn’t want a DJ who only plays their own music, or has excessive amounts of equipment.

Having chatted for a while, Mary booked me, and I asked her to suggest the music they love to dance to, and what they don’t like. On the day, I set up my Bose L1 sound system inside the house, together with 4 uplighters which provided plenty of subtle lighting.  I also provided a second Bose L1 for the garden the initial brilliantly relaxed garden party.  This was followed by dancing inside the house later when the temperature dropped!  Yes, we have had an awesome summer for the last few weeks, with 26 – 32 degrees c, and brilliant sunshine!

Dear Brian,
I’m so sorry that this is such a late email to say a big ‘ thank you ‘ to you for your kind help with the music on Friday night! It all went very well thank you and we have had lots of feedback from our guests to say that they had a lovely time. It was a great pleasure meeting you and it was lovely having your company and your skills providing the professional flow of the music. Music is such an important part of a party and even though guests didn’t partake in dancing as much as I had hoped,they certainly enjoyed the music and your skills of bringing everything together was certainly noted. Thank you too for not just the music, but also for making the announcements and generally guiding the flow of the party.
We were very impressed with your set up thank you. Your lights were amazing and certainly created a lovely atmosphere for the party. I wasn’t actually expecting anything quite so sophisticated, so again very many thanks for all your time spent setting it up. I would also like to thank you for your generosity in offering to play up to 1am if required. This was really very kind of you and much appreciated.

We all had a lovely time thank you and it certainly wouldn’t have been so successful without your help. We hope that you enjoyed it too and that you had a good journey back and that your event on Saturday went well.

Again, I am so sorry that I am late with my response to say thank you. I don’t know what happened to Saturday! ! My husband and I went to bed at Dawn and then I was up again just a few hours later to water the garden! We were out all day on Sunday, and to be honest with you after doing all the ‘must dos’ in respect of clearing up, I have only just found my feet today!

Once again, many many thanks for doing a great job, playing my playlist and for making it a great party.

With best wishes and many thanks,

This is what I played on the night: 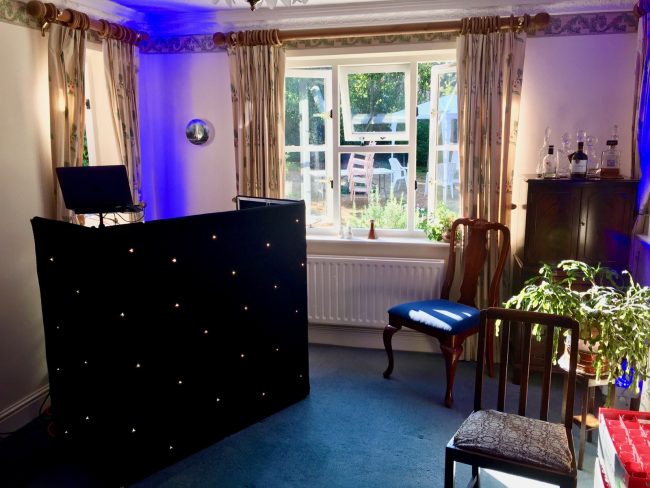 My most recent posts

Have I stirred your interest?

Go on, press the button to get the ball rolling! It will be my pleasure to arrange to visit you both for a no obligation, no pressure chat to discuss your wedding.